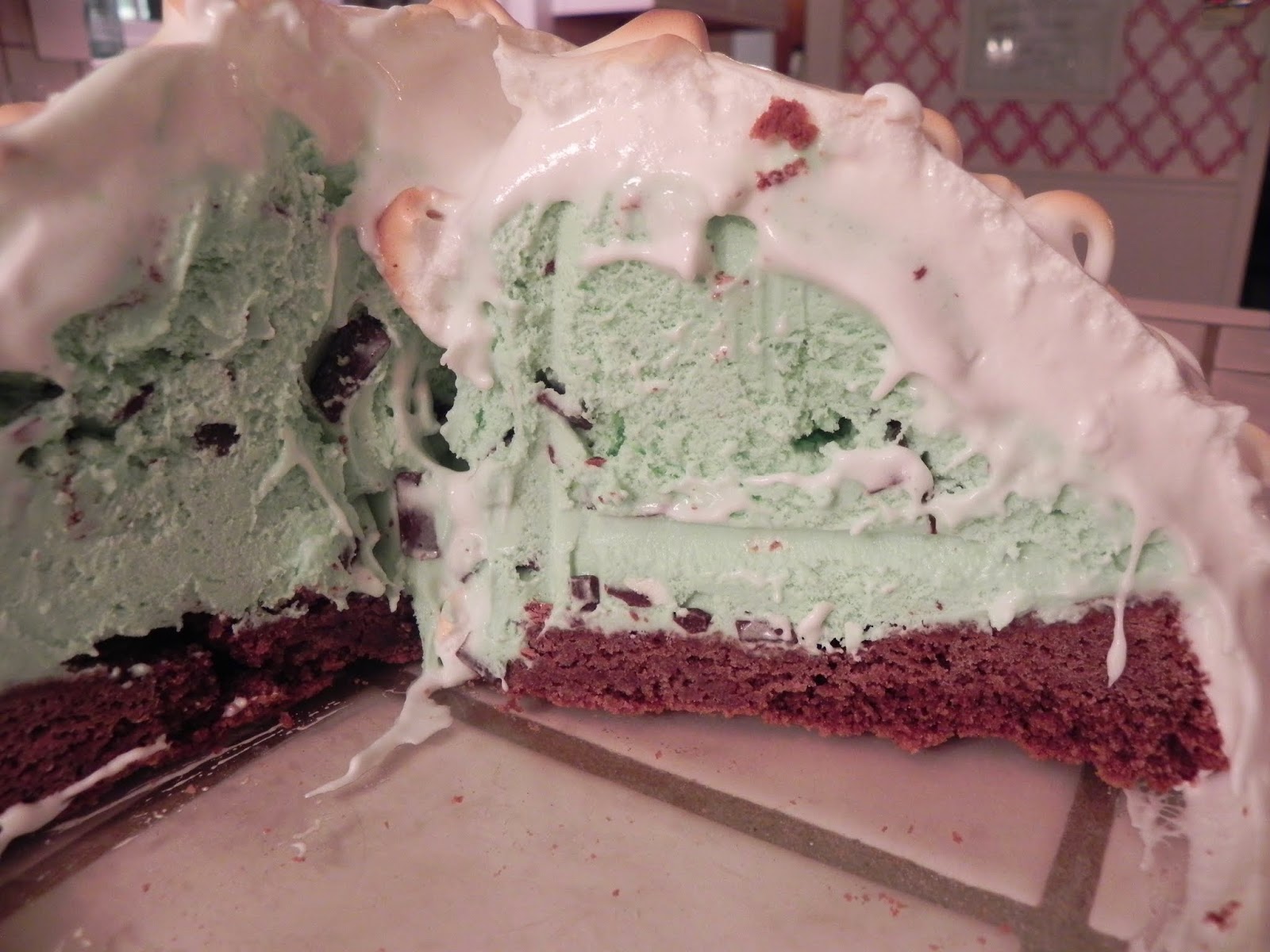 For the Ice Cream:
Line a 1-quart freezer safe bowl with waxed paper or parchment paper, leaving an overhang around the edges of the bowl.  Pack the Ice Cream very firmly into the bowl and freeze until hard.

For the Brownie:
Preheat oven to 350*.  Grease and flour an 8-inch round cake pan (and line with a waxed-paper circle if you have trouble with things sticking); set aside.

In a mixer bowl, cream the Butter and Sugar together on medium speed.  Add the 2 Eggs, mixing well.  Gradually stir in the remaining ingredients, stirring just until mixed together.  Pour batter into the prepared pan.  Bake at 350* for 25 to 30 minutes or until a toothpick inserted into the middle of the cake comes out clean.  Cool in cake pan 10 minutes, then invert onto a cooling rack and allow to completely cool.  When Brownie has thoroughly cooled, place on an oven-safe serving dish, invert the frozen Ice Cream on top of the Brownie, remove the bowl (leaving the waxed paper in place) and return Brownie/Ice Cream to freezer.

For the Meringue:
Combine the Egg Whites, 1 Cup Sugar, and Cream of Tartar in the top of a double boiler.  Place over simmering water and cook, stirring constantly with a wire whisk, for 5 minutes or until mixture reaches 160* (I set a timer).  Remove from heat and transfer to a large clean mixing bowl.  Beat on High speed for 5 minutes or until stiff peaks form.

To Bake:
Preheat over to 500*.  Remove the Alaska from the freezer and bake for 2 to 3-1/2 minutes, or until meringue peaks are lightly browned.  Keep a Very Close Eye on the Alaska after 2 minutes have passed!  Slice into 10-12 portions and serve immediately.


"In this is love:
not that we loved God,
but that He loved us
and sent His Son to be the
atoning sacrifice for our sins.
Beloved,
if God loved us so very much,
we also ought to love one another."
1 John 4:10 & 11, Amplified

Don't, oh please don't let this Dessert overwhelm you.
Yes, it looks impressive.
But preparation truly is not.
Can you pack Ice Cream into a bowl, bake a Brownie,
and whip some Egg Whites?  Then you can make this!

You can also make some fun variations:
use half of a cake mix
(Yellow? White? Angel Food?)
and different Ice Cream
(Strawberry? Chocolate? Raspberry Sherbet?)
and snap! dessert's a piece of cake! 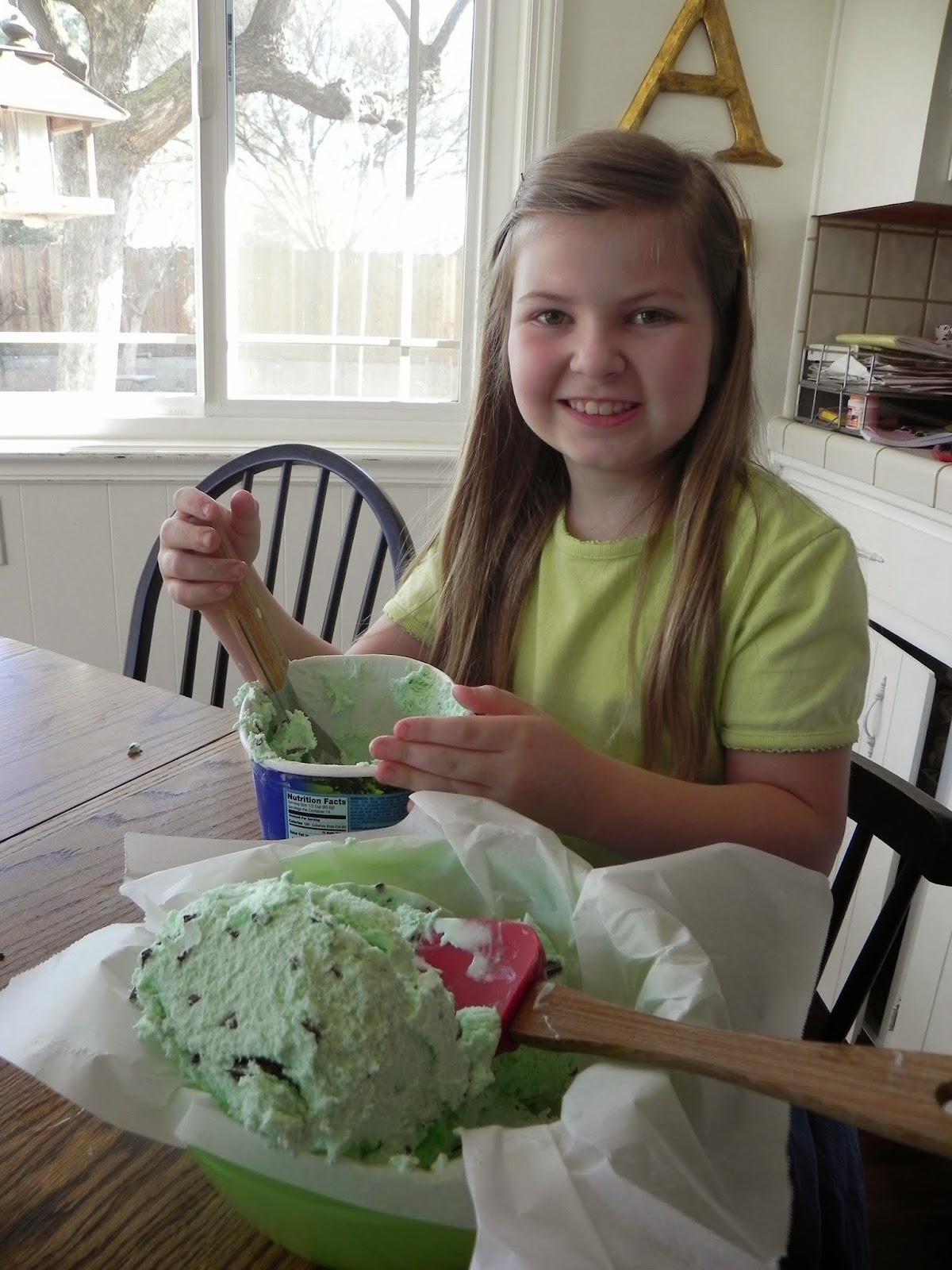 Pack the Ice Cream firmly into a freezer safe bowl 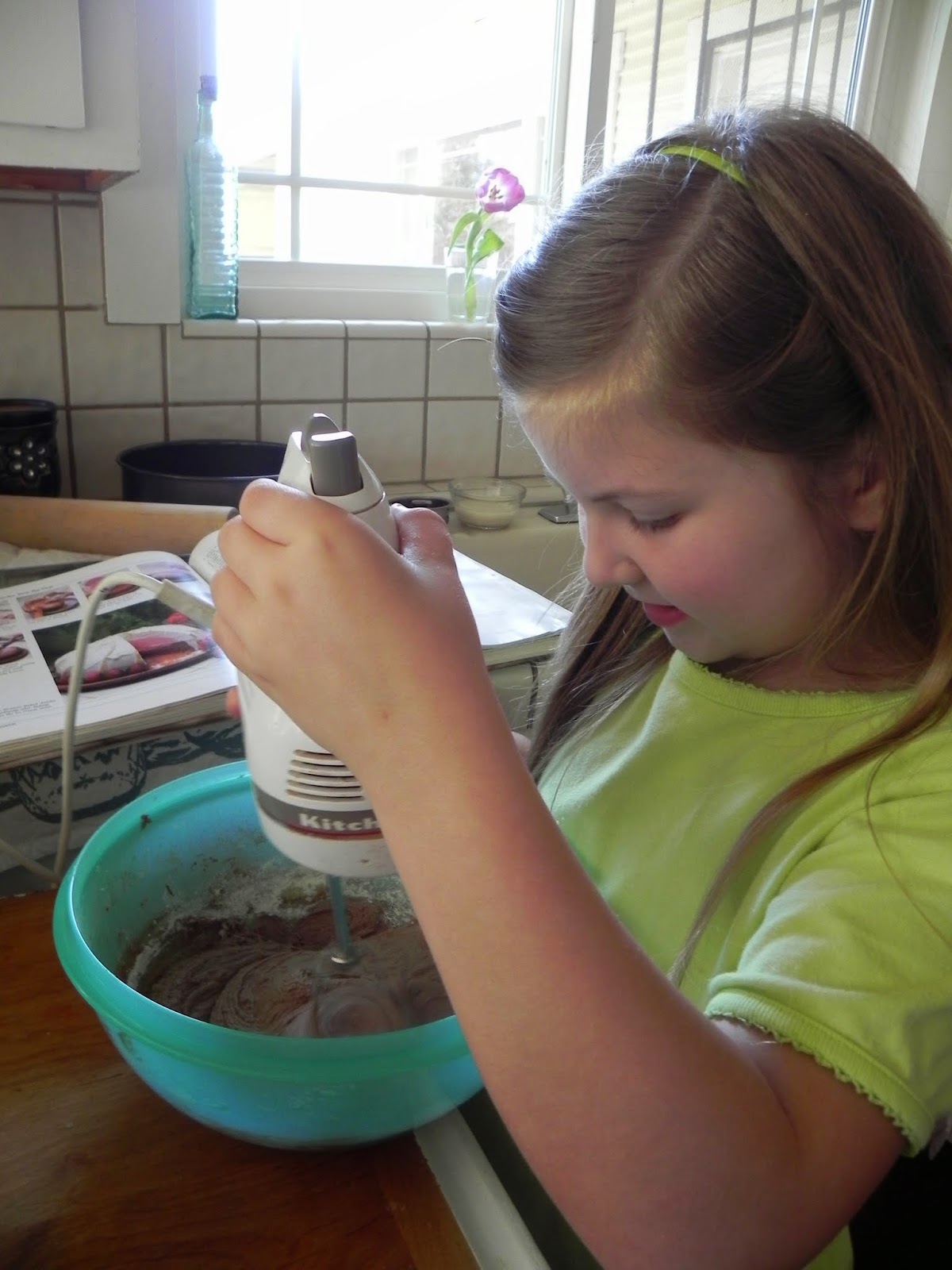 Mix the Brownie batter as instructed 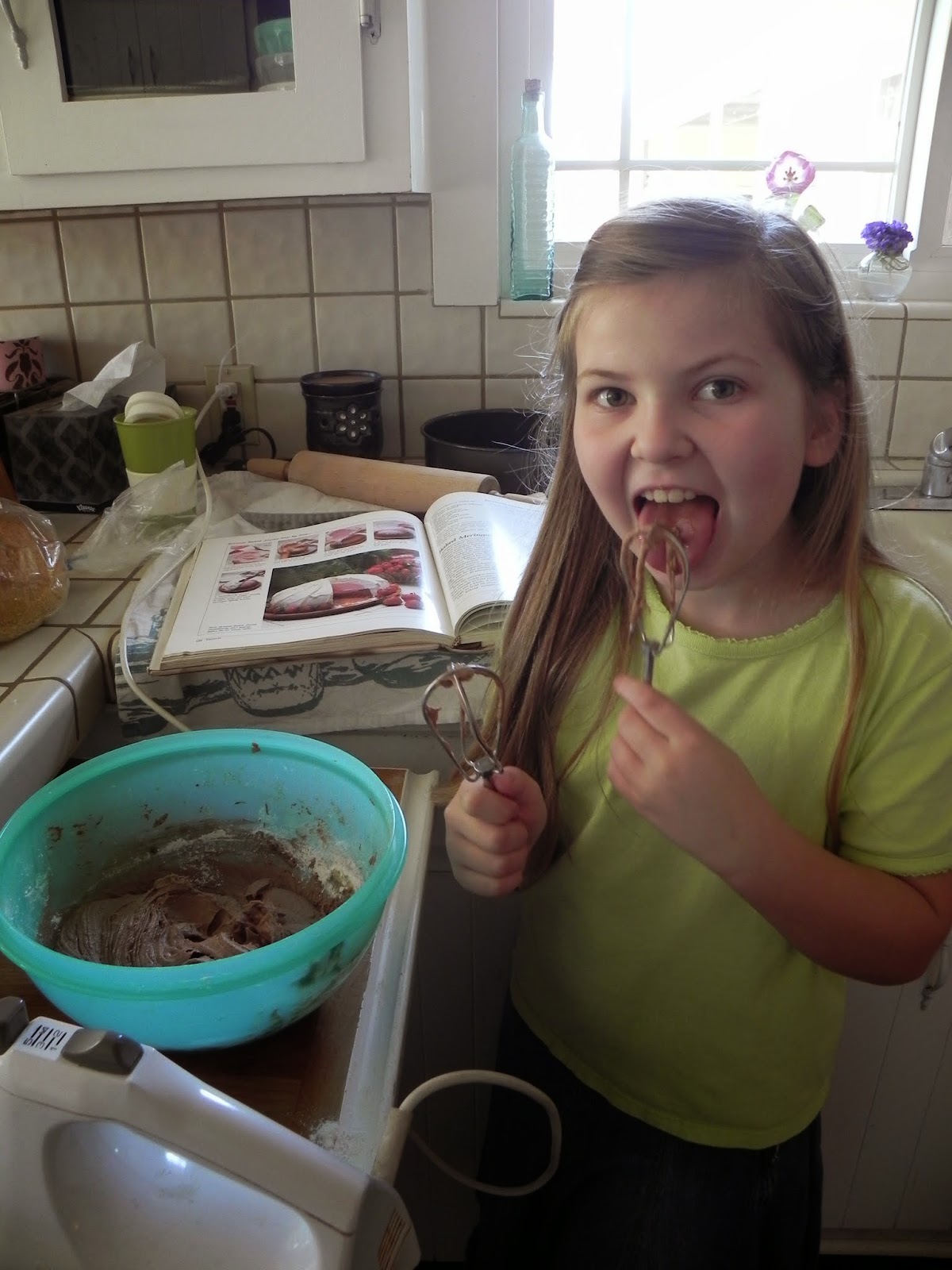 Cleanly lick off east beater before placing them in the sink 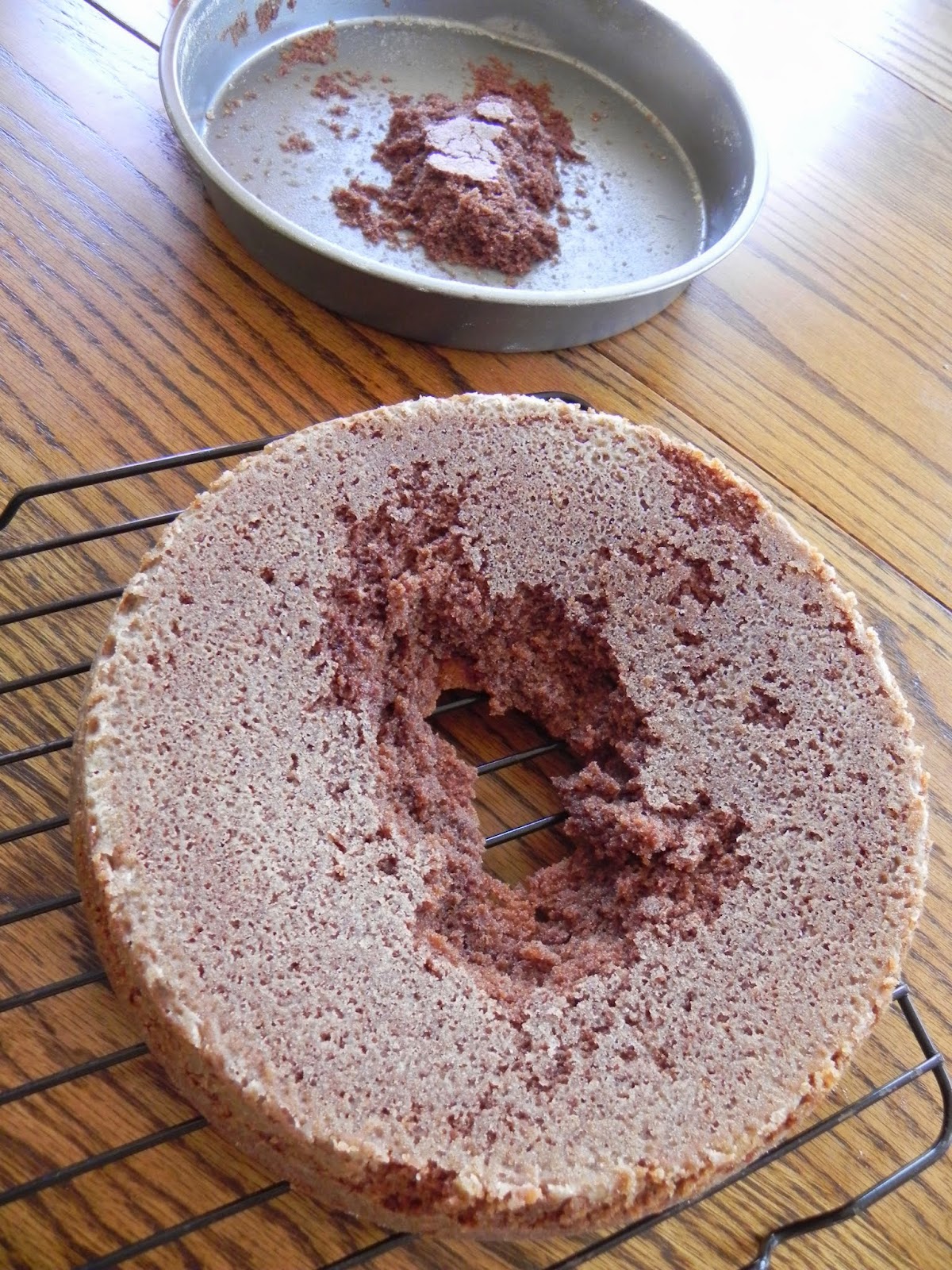 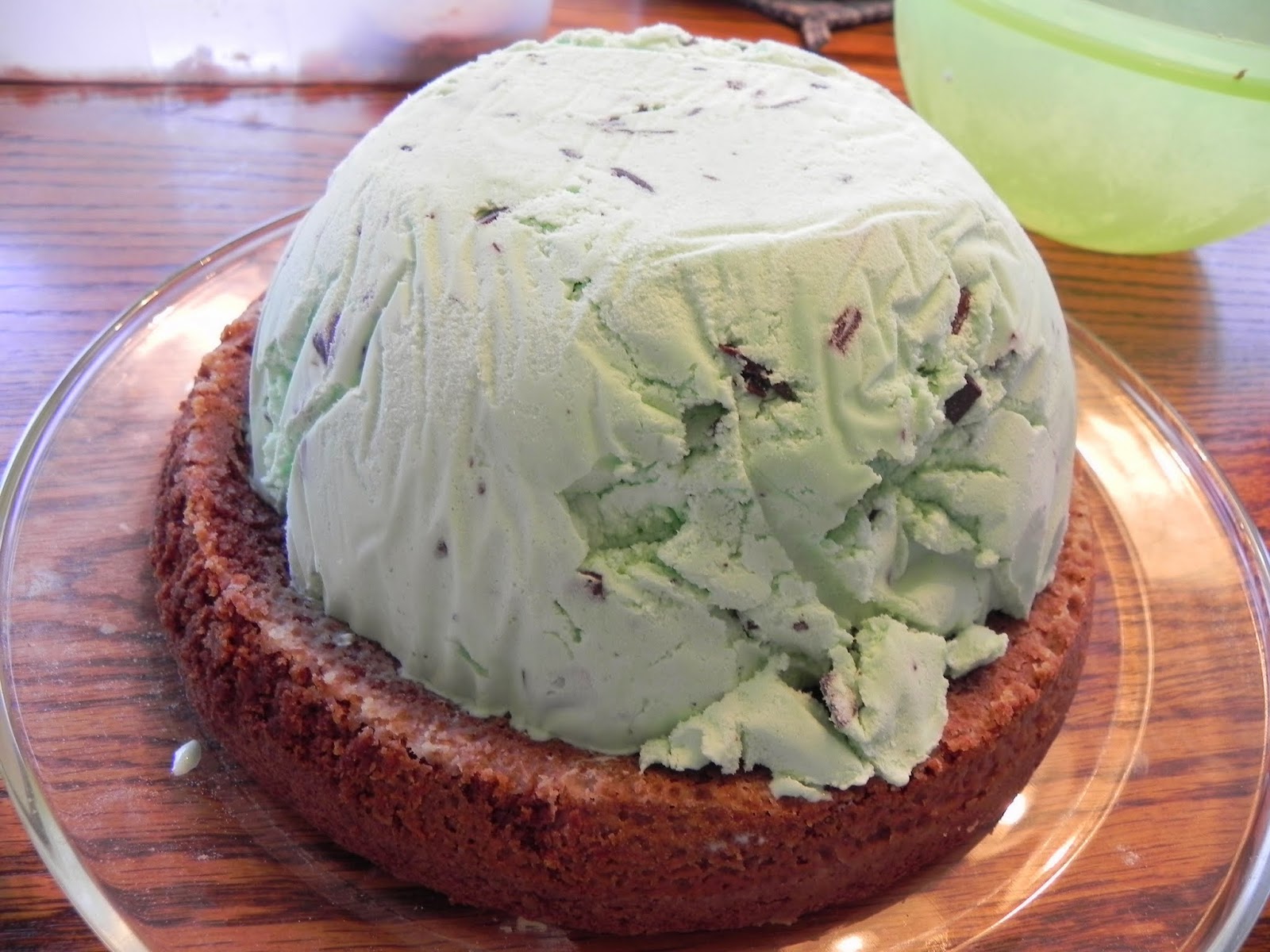 Place the Brownie on an oven-safe plate; top with Ice Cream 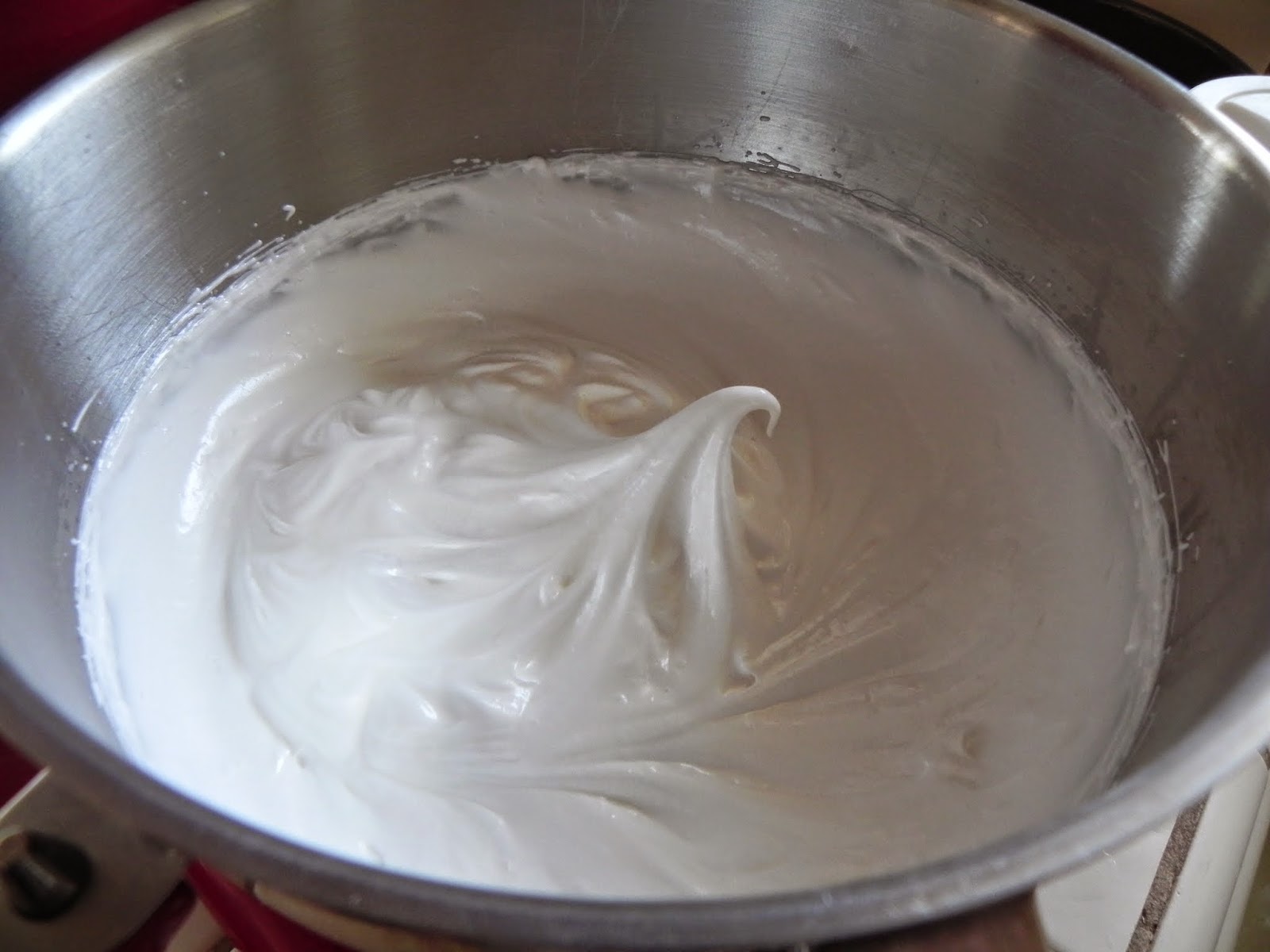 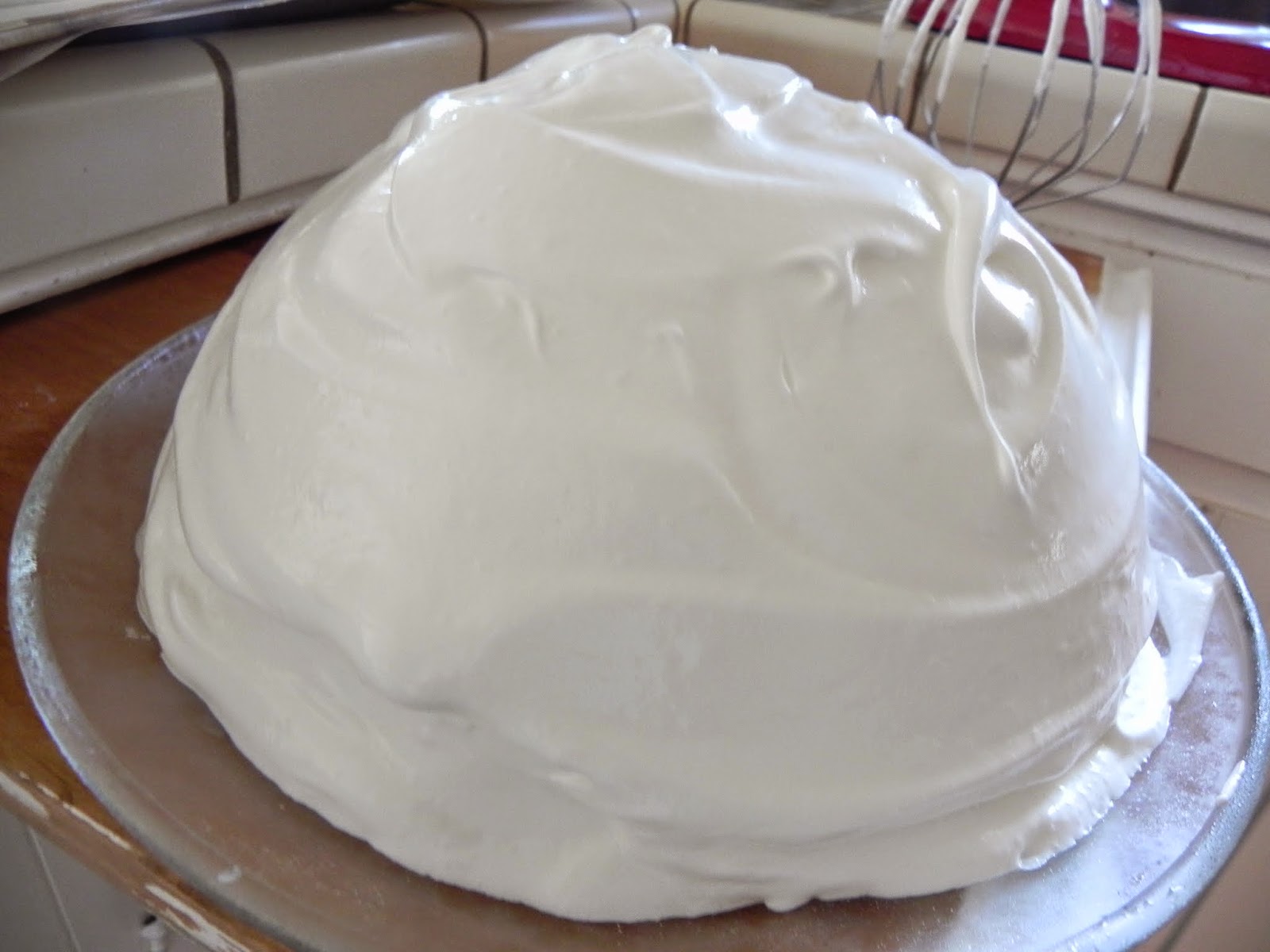 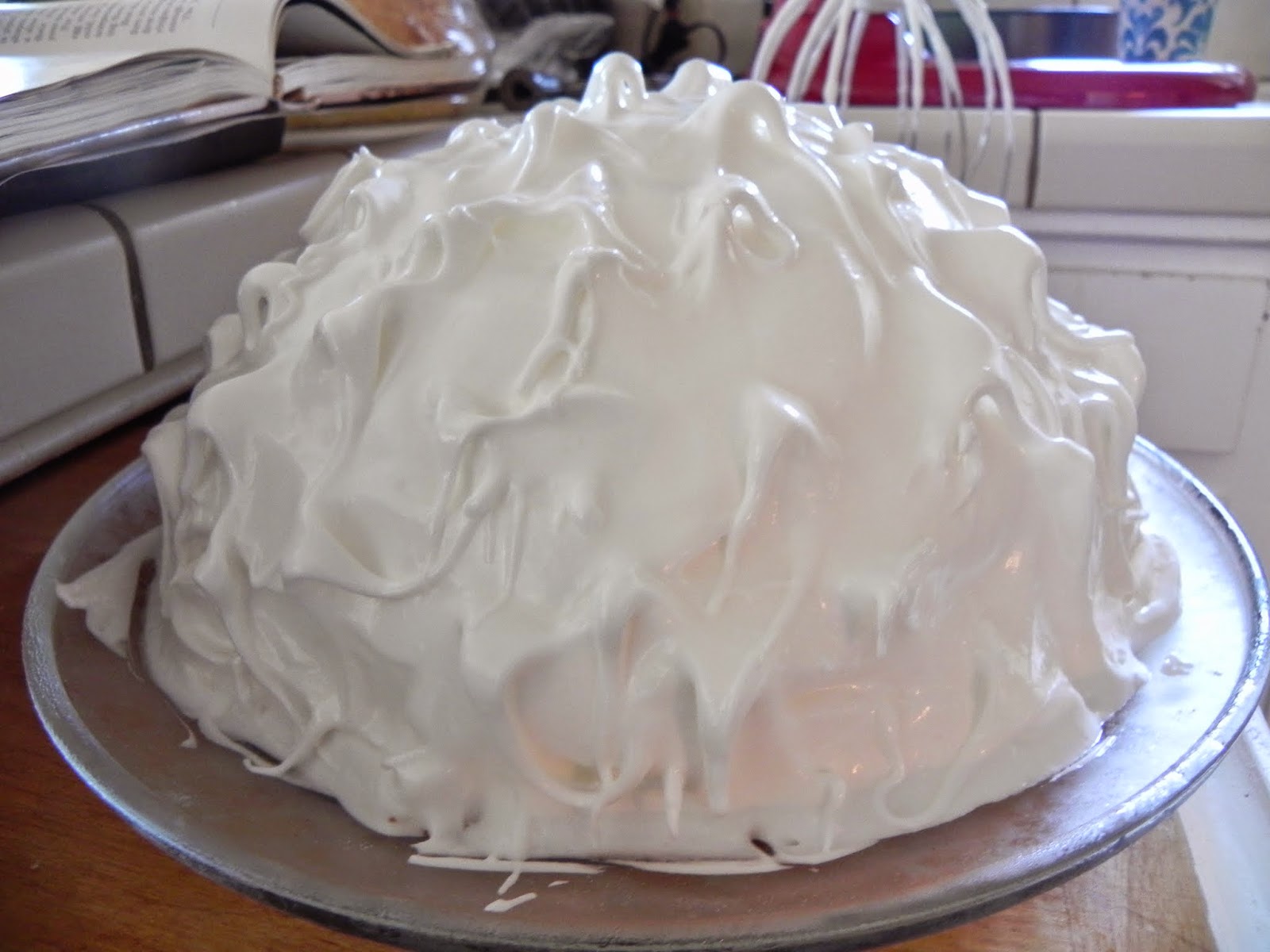 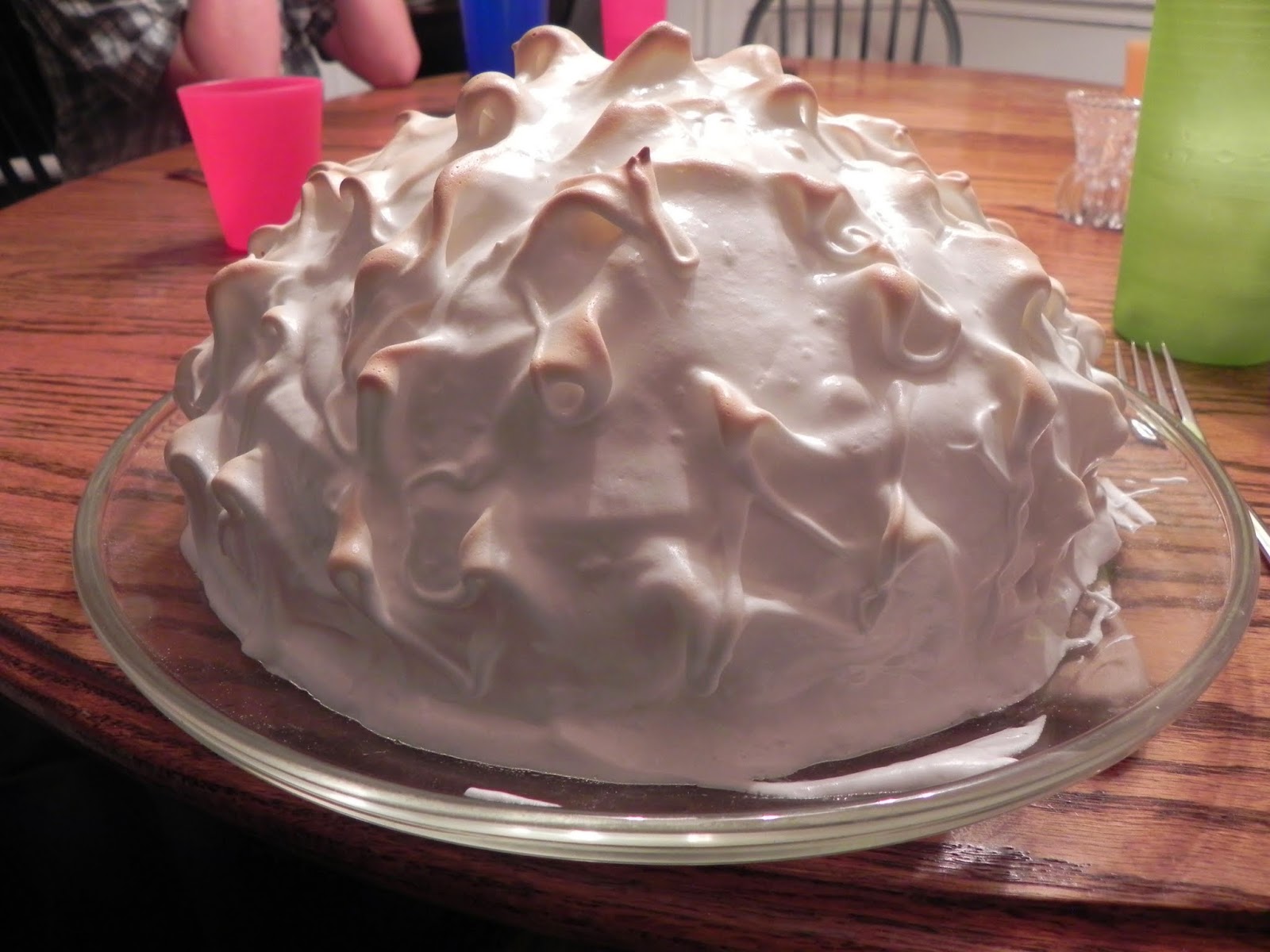 And bake until a light golden brown

According to the nine-year-old, we had a Very Strange dinner for Valentine's Day: fish soup with the shells still on and a weird baked ice cream dessert.  (We had Chioppino and Brownie Baked Alaska.)

I have had a fascination with Baked Alaska from almost the very beginning of my cooking experience.  I think I was about a freshman in High School when I made my first Baked Alaska.  In the evenings I would sit and read my Mom's cookbooks, drooling over the elaborate foods in her Southern Living cookbook.  Lobster Thermidor and Bananas Foster were out of the question.  But Baked Alaska?  Most everyone has these basic ingredients in their pantry and freezer.

So, I would make the Alaska in the afternoon, pop it into the freezer, and then begin  to ask when it would suit to have some company in the evening to help eat this dessert, because Baked Alaska is always best enjoyed with friends.  Usually we would ask my Uncle, Aunt, and Cousins J & K.

Now, you need to understand that my siblings and I have always had a very close relationship with our cousins.  J is the oldest grandson, I the oldest granddaughter, and with only a year and a half between us, J is the older brother I never had.  Growing up through the Junior High years we would pretend that we "liked" each other (which really just consisted of passing notes like "What are you doing this afternoon").  This was *hopefully* to prevent any classmates from developing a "crush" on either of us, which, when you think about how small our school was, everyone already knew we were cousins.  Such is the logic of sixth and seventh graders.

Our close relationship was especially great when I reached High School and J had his driver's license.  You see, upon entering Young Folks after Eighth Grade graduation, if I wanted to go to Young Folks after Church I had to ask for a ride to get there.  This was extremely challenging to me.  I was only thirteen and I had to ask someone who could drive--that means they were at least three years older than me--for a ride.  How mortifying!  So when J got his license and his Grandpa gave J and K his old brown stick-shift Ford Ranger it was a great relief to awkward me.  No more sheepishly asking for rides.

Now keep in mind that this truck was nothing special: roll-down windows, no AC, keyed entry locks--no extra power features at all.  And J was ever the gentleman: he would unlock my door from the outside before going to his side and getting in.  However, unbeknownst to me, there was a young man observing this.  He saw all this from a distance and he knew I was too young to date (he even knew when my sixteenth birthday was and when I really would be old enough to date).  What he didn't know was that J was my cousin.  And so, four days after my sixteenth birthday, T called asking for a date.

And the rest, she wrote, was history.
I traded riding in my cousin's old brown Ford Ranger for riding in my honey's old(er) brown Chevy pickup.

And that, my friend, is how Brownie Baked Alaska and my cousin's old brown truck helped to bring T and I together.

And yes, T and I still laugh over it!

Slightly adapted from The Southern Living Cookbook.
Posted by Unknown at 2:52 PM 1 comment:

Email ThisBlogThis!Share to TwitterShare to FacebookShare to Pinterest
Labels: Dessert 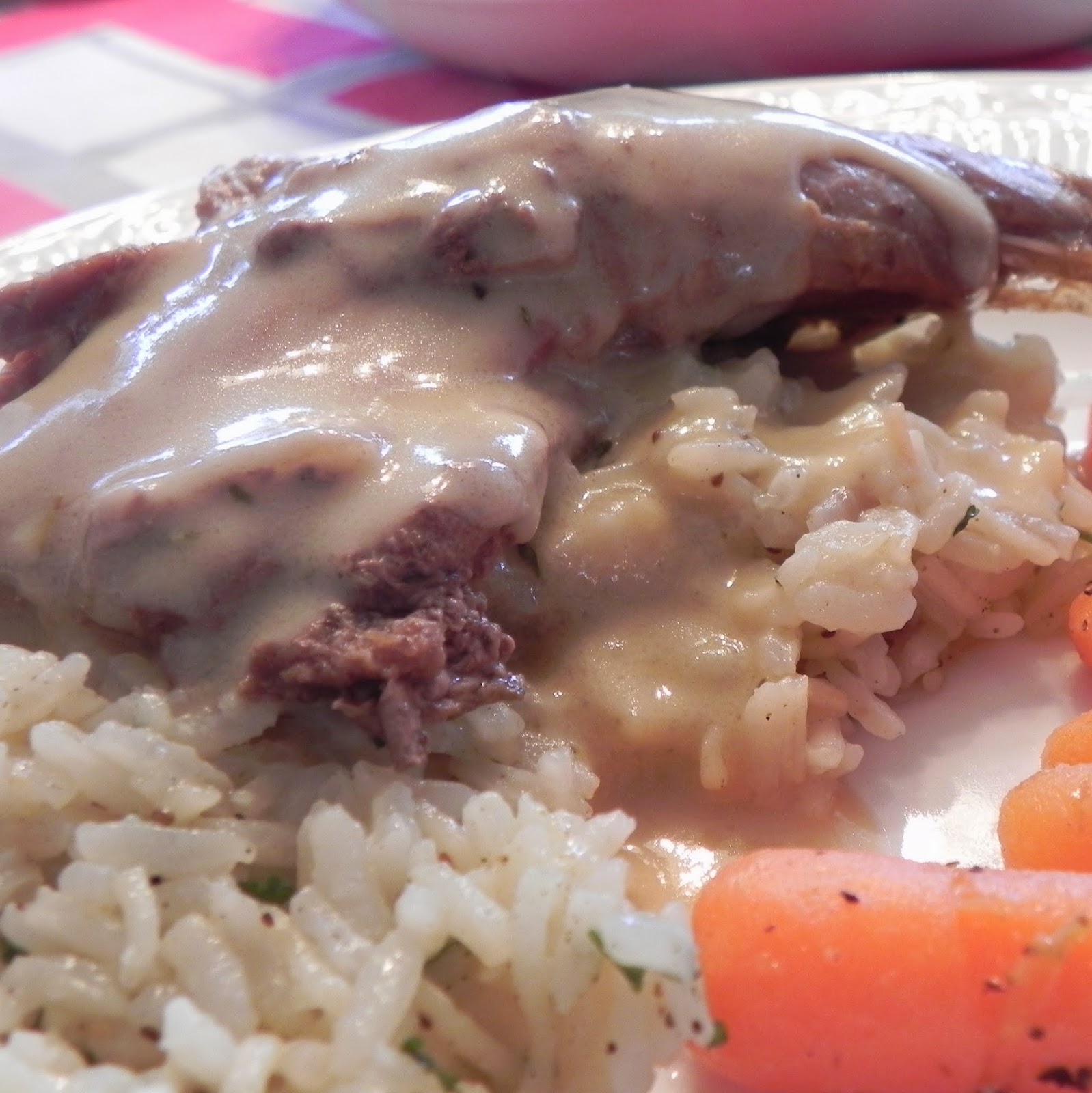 The Night Before:
Rinse and pick over your Pheasants, place in a large container or zip-top plastic bags and pour Soy Sauce over birds.  Cover and refrigerate overnight.
The Day Of:
Drain off Soy Sauce and discard; place the Pheasants in an electric roaster oven pan (because most likely you won't have a pan for your oven large enough, and if you're like me, you won't want your oven running all day.  But I digress.), and dust with Flour; sprinkle with Salt and Black Pepper.

In a large skillet, fry Bacon until most fat is rendered off; remove Bacon from pan and drain off all but 1 Tablespoon grease.  Add Onions and Celery, cook until Onions are softened.  Stir in Rosemary, Thyme, Ginger, and Beer, cooking until alcohol has evaporated.  Spoon over the Pheasant in the roasting pan, place Bacon over the birds and gently pour Chicken Broth around the birds.  Cook at 250* for 6 to 7 hours, until Pheasants are very very tender and meat is falling off the bones.  Serve with gravy over a double recipe of Rice Pilaf.  Serves 8-10, depending on the size of your Pheasants.

For the Gravy:
In a 2-quart saucepan over medium/medium-high heat, melt the Butter and stir in the Flour until smooth.  Slowly stir in the Pheasant broth, cooking until thickened, about 10 minutes.  Reduce heat to medium-low; stir in Half-and-Half and herbs.  Season to taste with Salt and Black Pepper.  Serve over Pheasant. 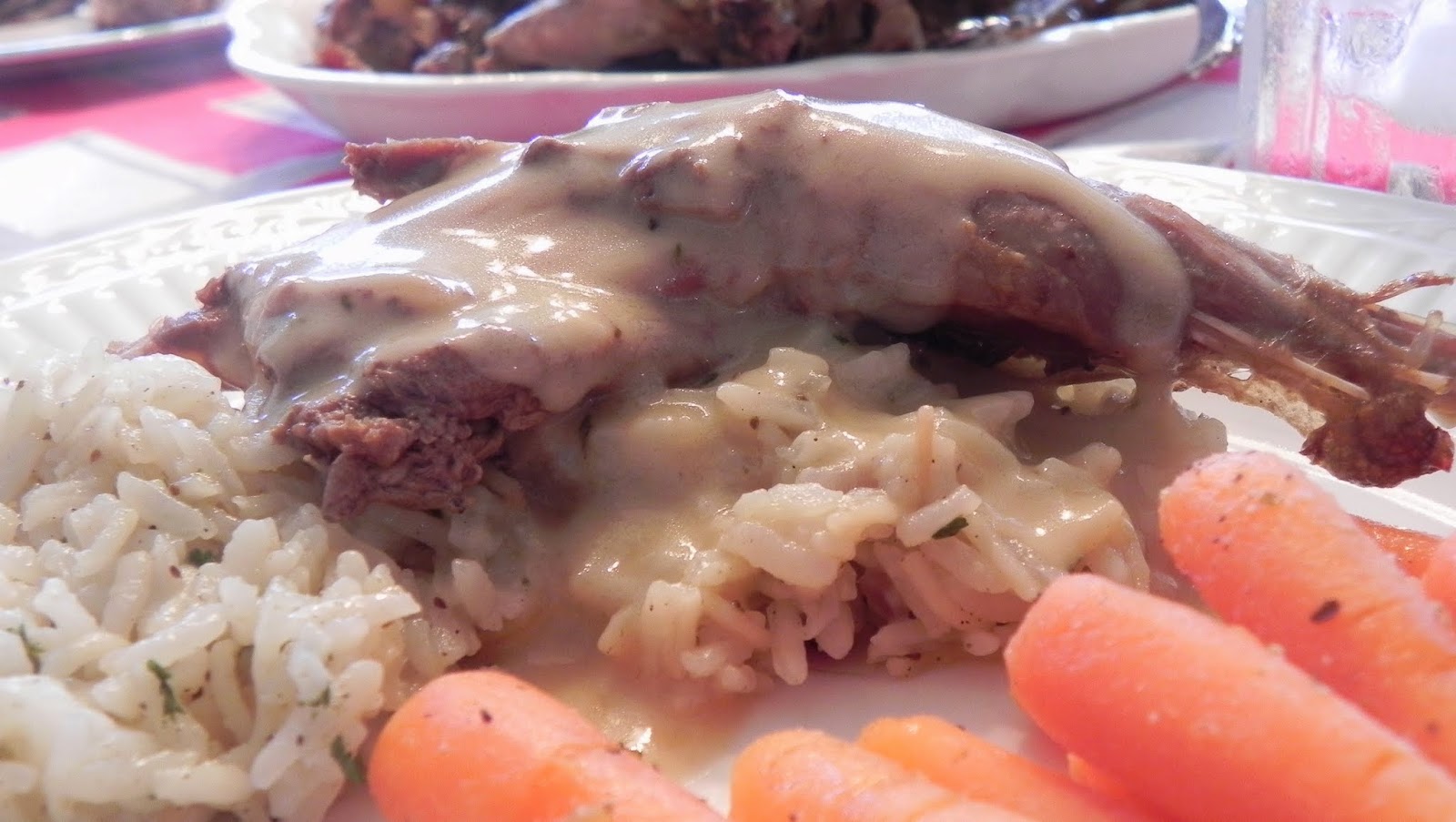 "Be ye, therefore, followers of God, as dear children;
And walk in love,
as Christ also hath loved us,
and hath given Himself for us
an offering and a sacrafice to God
for a sweet-smelling savor."
Ephesians 5:1 & 2

For the past several years the men in T's family have went Pheasant Hunting three hours north of here.  Sporting Games on Friday, a Hunt (with dogs!) on Saturday.  One must be 12 years old to go along and J & D finally have hit this milestone!  They have faithfully and diligently saved each penny, they have taken their Hunter's Safety Class, they have practiced and practiced their hunting skills, they have dreamed of and longed for this day.

And now the Hunt is over.  It was a success!

And I have 12 Pheasant in my freezer.

Plus the Pheasant from last year.

Because the birds from the year before that turned out dry and tough and worthless.  And I really didn't care to repeat the experience this past year.

But honestly, how can a Mom tell her hunters that she really, really doesn't want to fix their game?  She can't.  So I scoured the internet for recipes and found this one.  And it turned out really good!

It seems that Pheasant (especially *wild* Pheasant) really are much happier when cooked for a long time over low heat.  Well, maybe the Pheasant aren't happier, but those dining on them are.  It also seems that Pheasant really isn't prepared much here in the States, for most all the recipes I found were from the UK.  But maybe I just live in the wrong part of the country, or even the wrong era:  My Grandpa and Grandma J tell me that back in the 1940's and 1950's when they lived in Kansas, many  Pheasant Hunting parties were organized for Ohio-ans who would come out just for the opportunity to hunt Pheasant.  Grandma says she fixed a lot of Pheasant, but she doesn't remember how she cooked it.  I think this recipe would also be fantastic with Cornish Game Hens, Squab, or Turkey.  Or even Chicken halves, for that matter.

And when I get the photos of the Hunt transferred from the phone to the computer, I'll add them.

Adapted from the UK edition of Good Housekeeping. 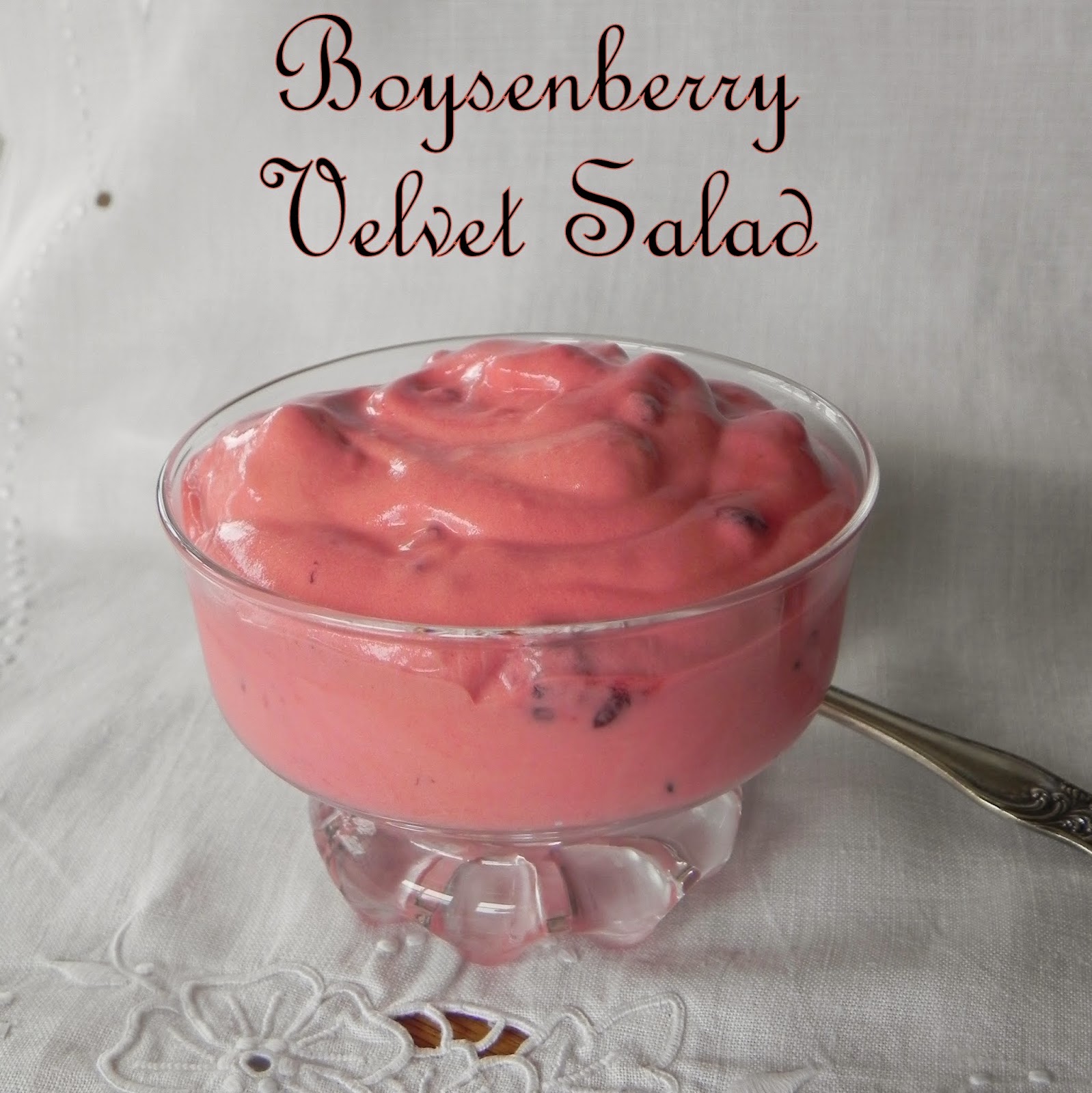 Mix Raspberry Jello and Vanilla Pudding in a saucepan; slowly stir in Water.  Cook over medium heat until it comes to a boil; cook and stir 2 minutes.  Cool on counter until slightly jelled, about 1 hour.  Stir in frozen Boysenberries.  Fold in Cool Whip.  Transfer to serving bowl; cover and refrigerate.  Serves about 8-10.

"Do not forget or neglect or refuse
to extend hospitality to strangers
in the brotherhood--being
friendly, cordial, and gracious,
sharing the comforts of your home
and doing your part generously,
for through it some have
entertained angels without knowing it."
Hebrews 13:2, Amplified Version
Here is a Pretty and Pink and oh! so yummy jello salad--perfect for Valentine's Day.  We love this fruity dessert around here, so I usually double the recipe.  Extra special when served in footed dessert cups! 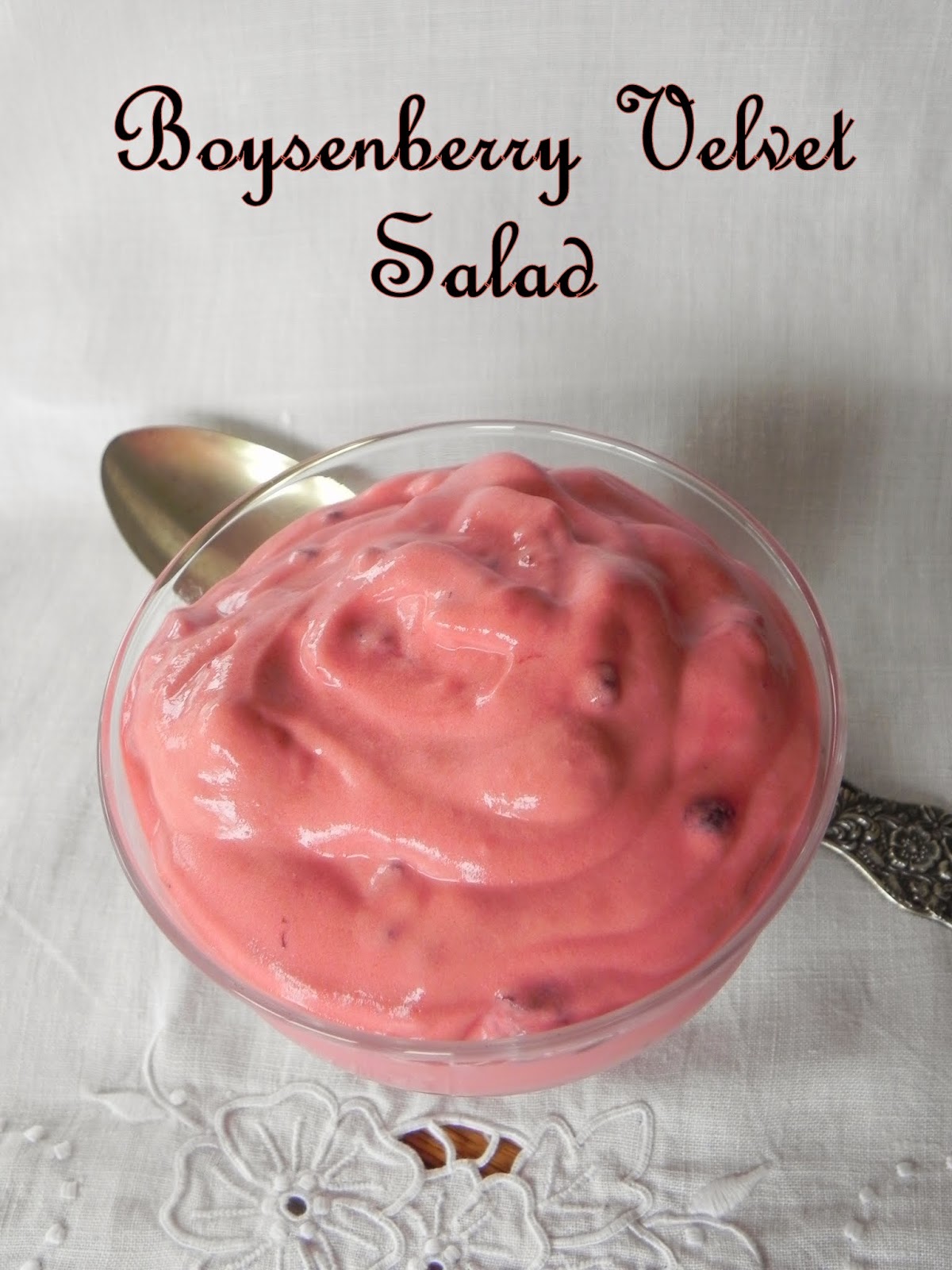 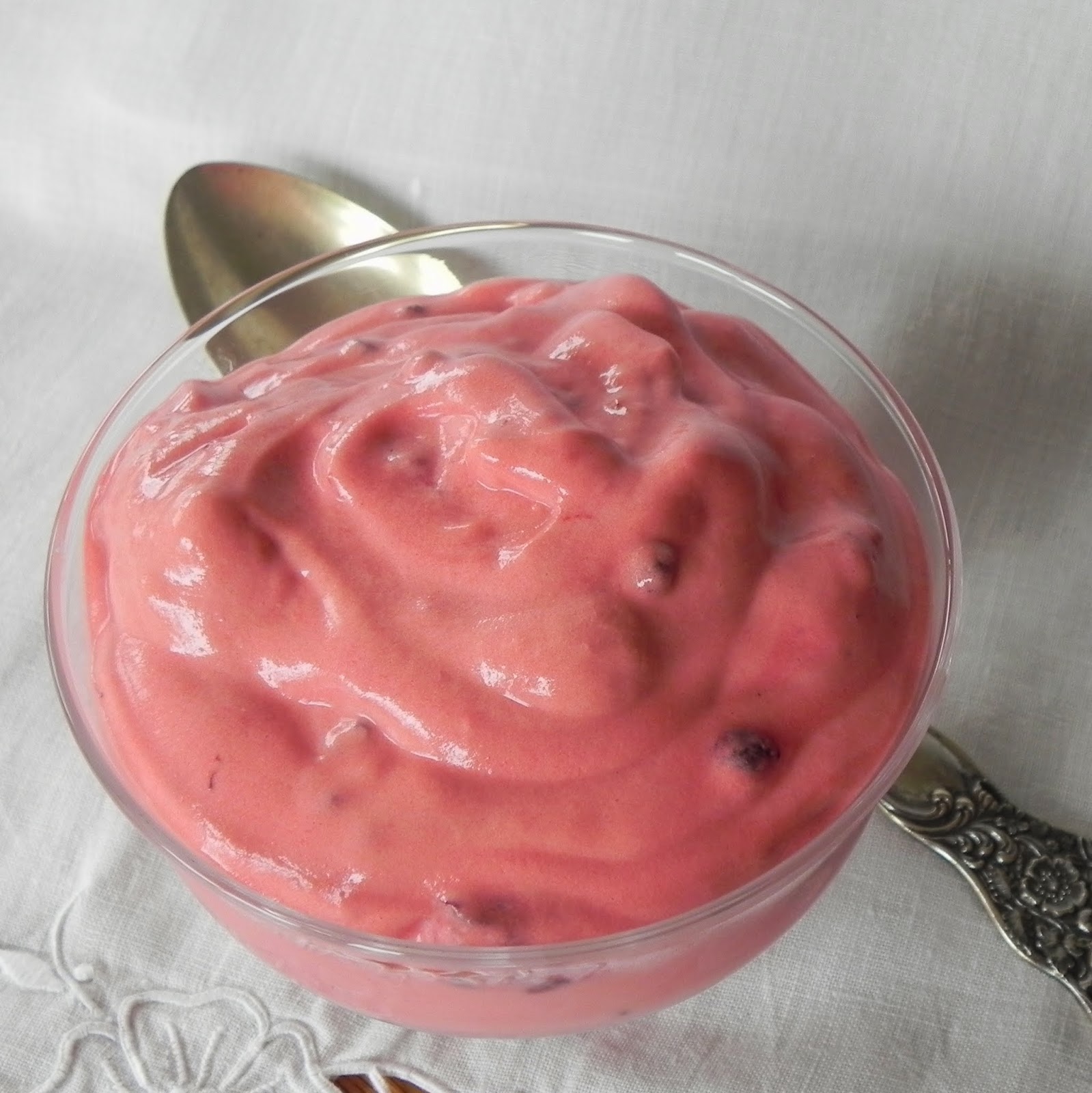 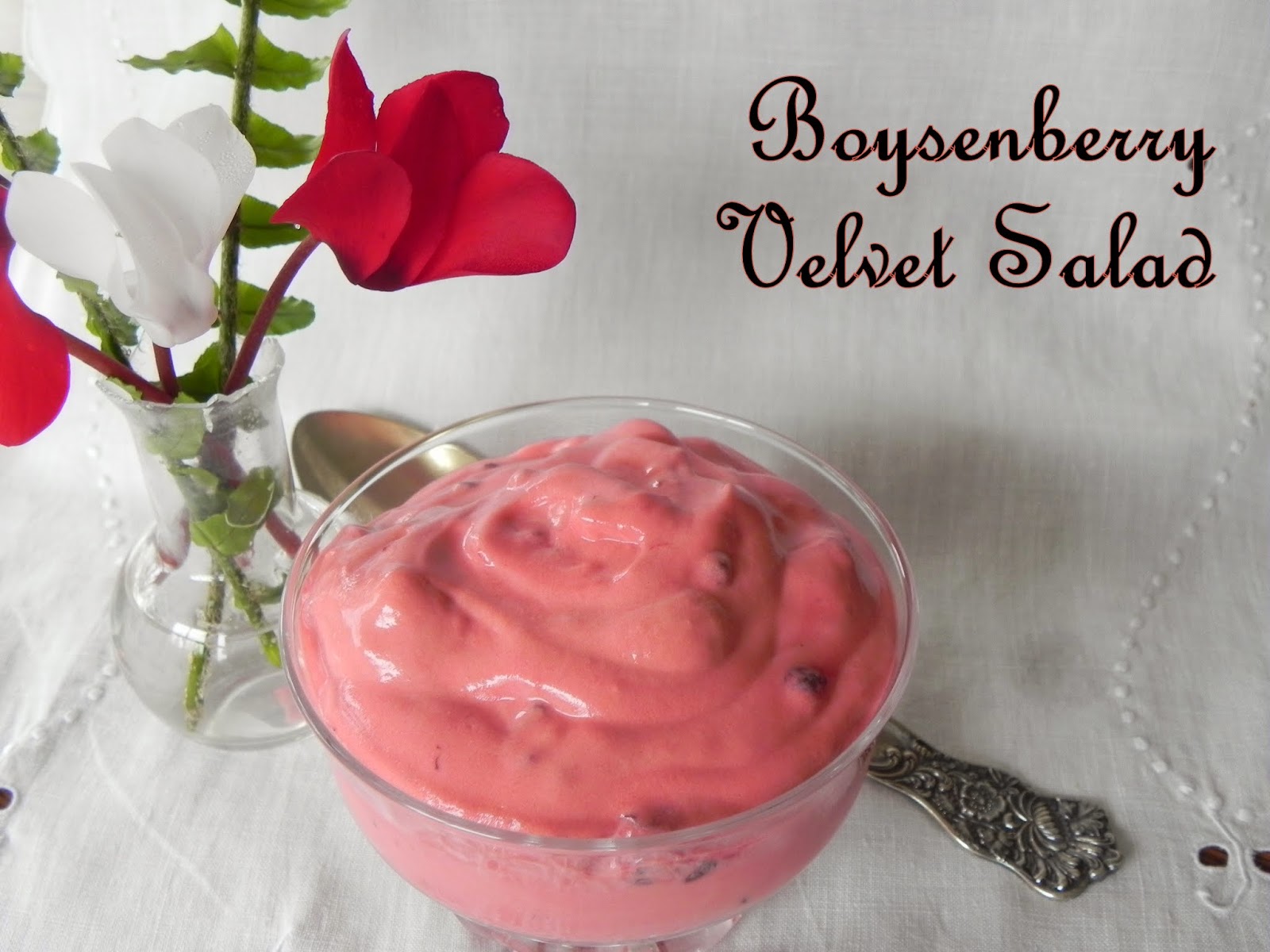 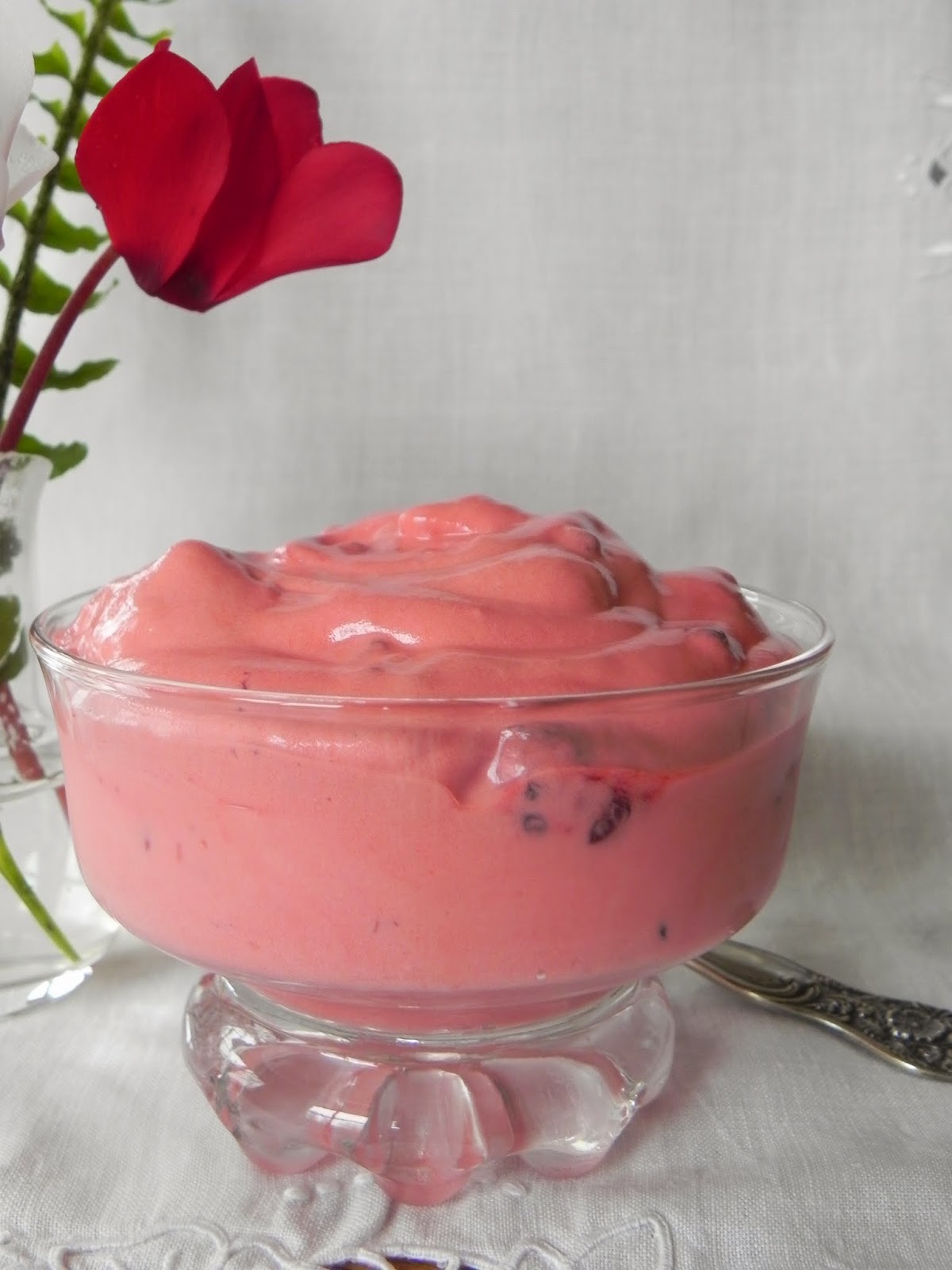 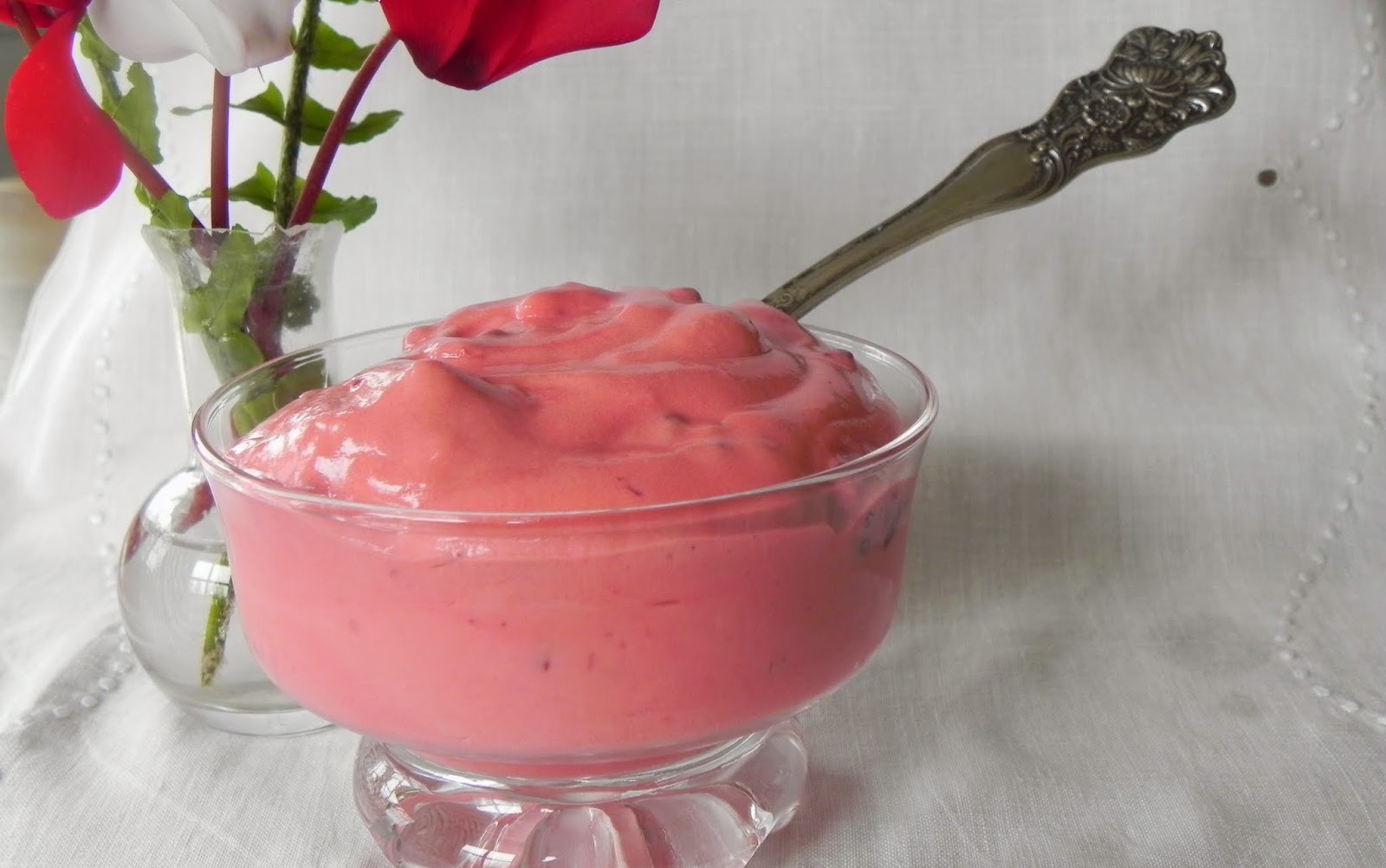 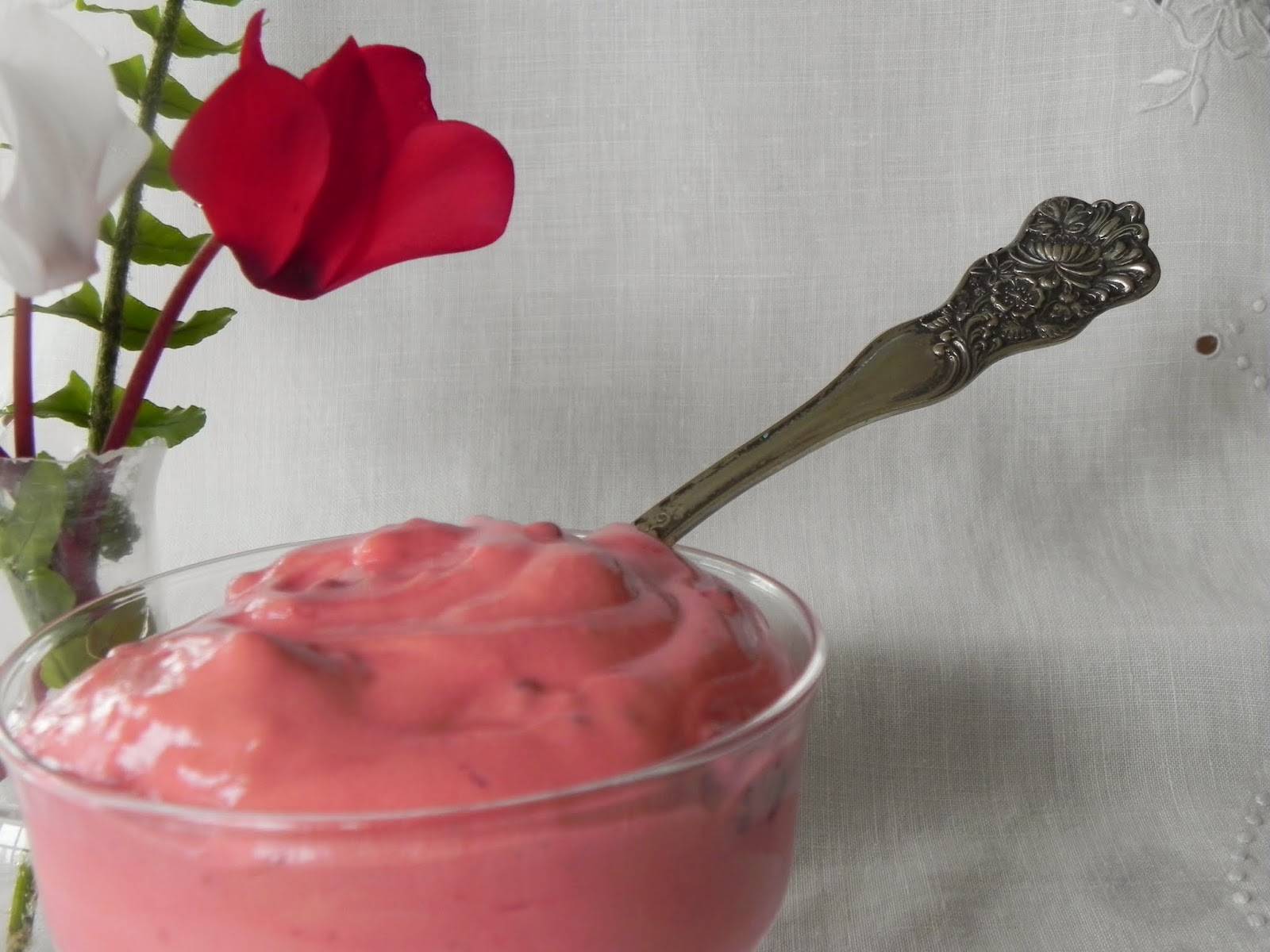 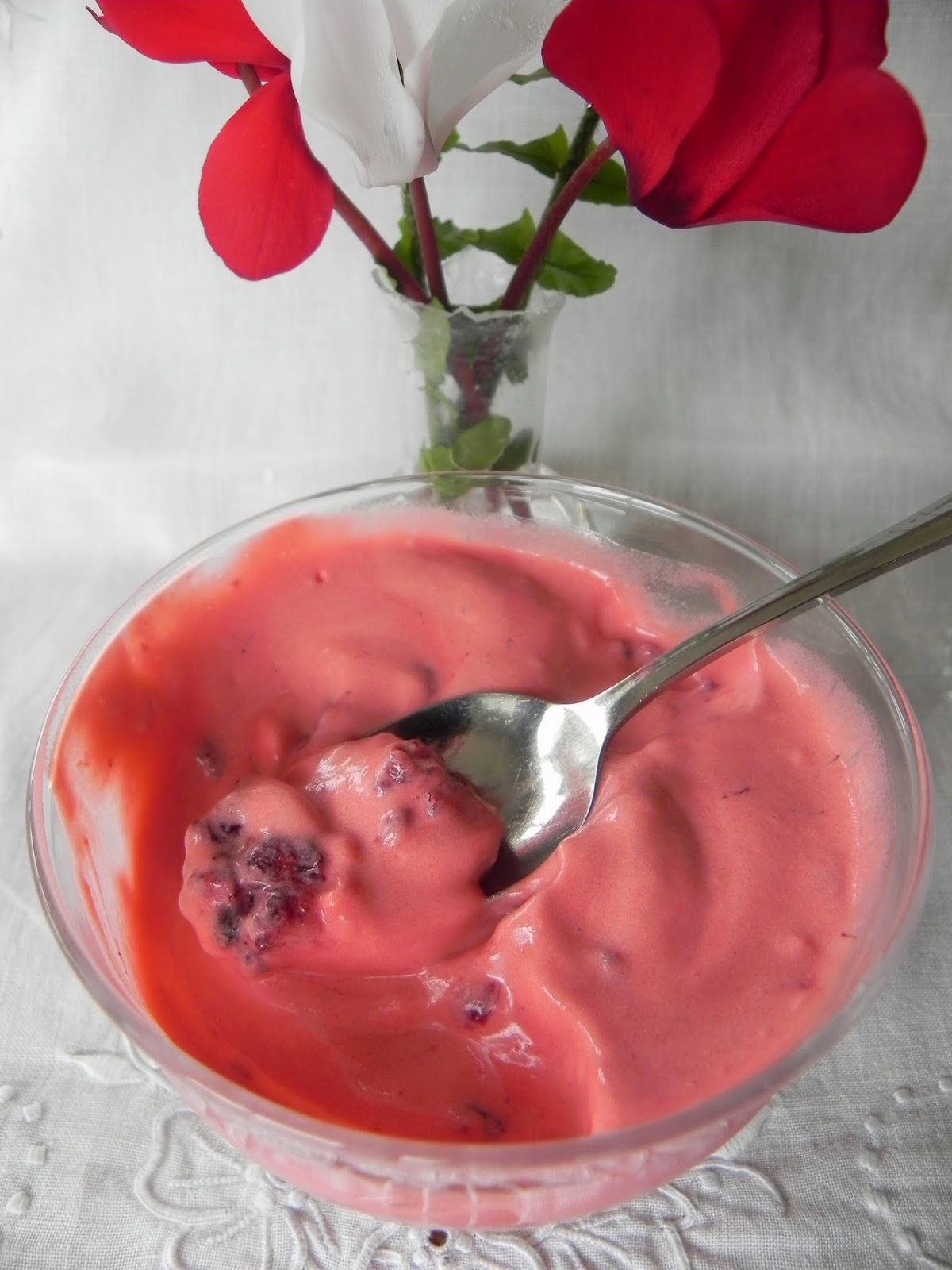 From Seasoned With Love cookbook.
Posted by Unknown at 1:30 AM 5 comments: 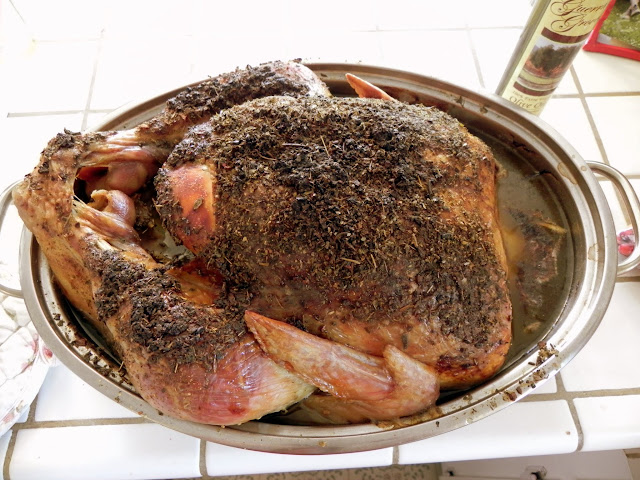 So Many Cooks Have Visited

Recipe Box To Your Inbox

This Week's Favorites ~ Most Viewed Recipes in the Past Week

Who I Read When I'm Not Cooking